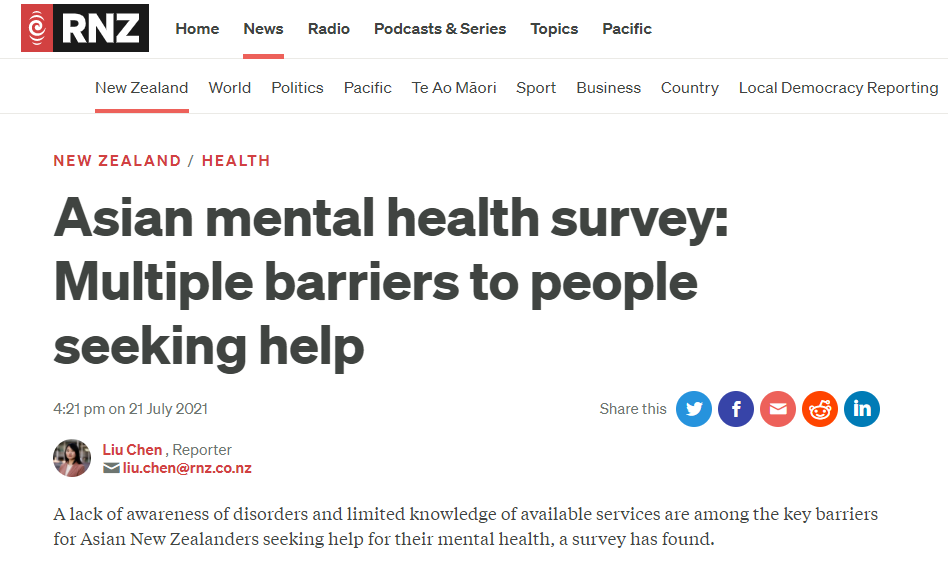 Calls for help for Chinese businesses affected by Coronavirus 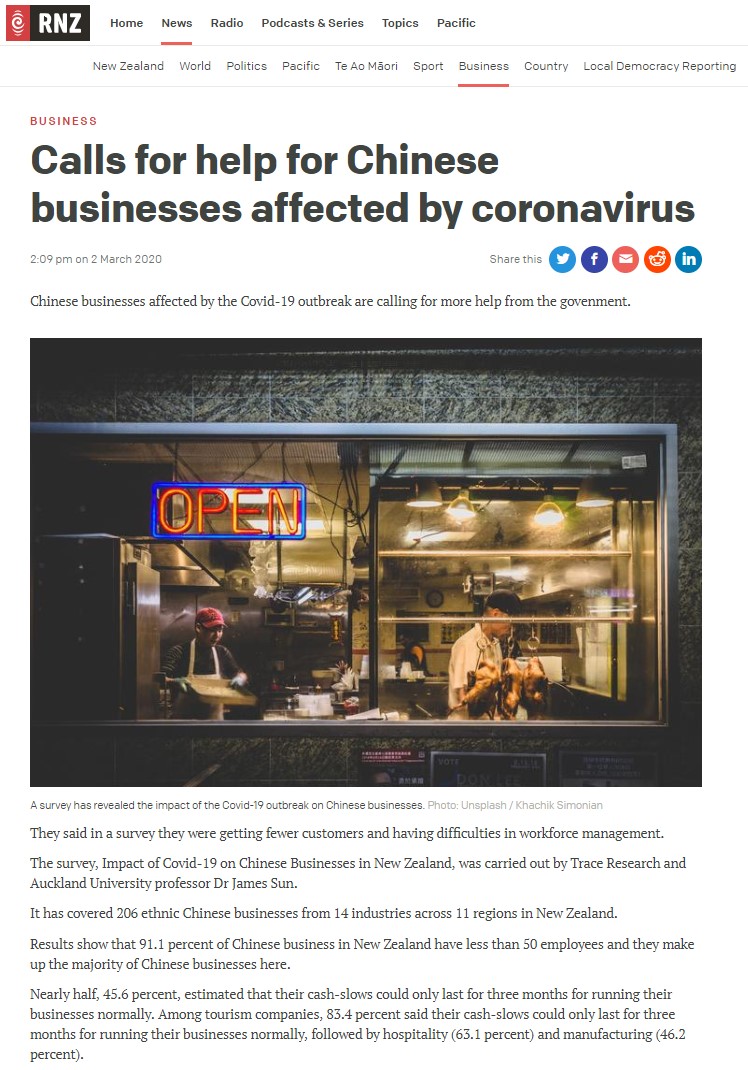 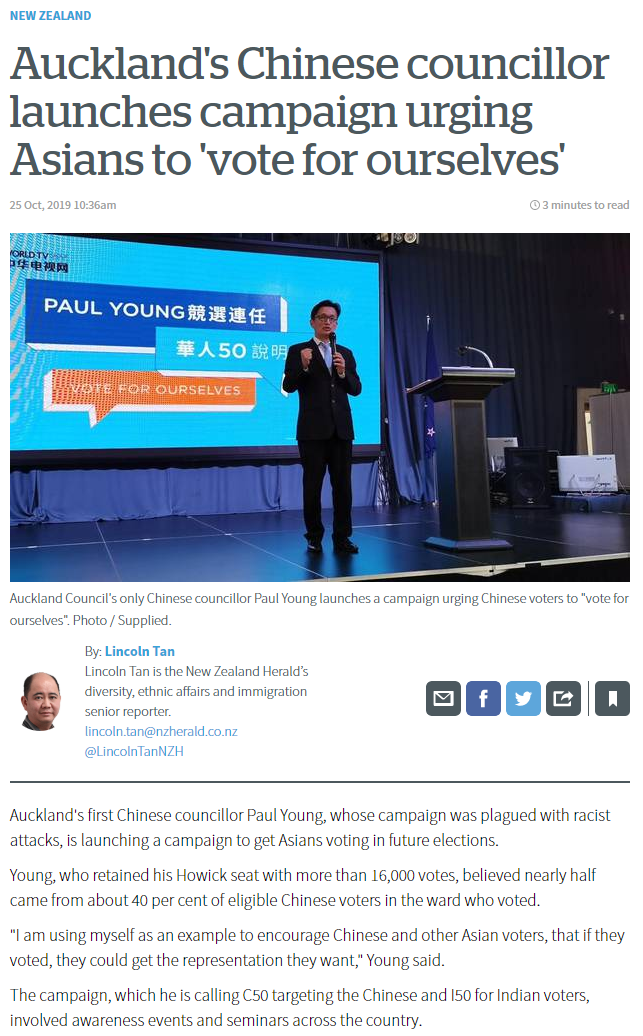 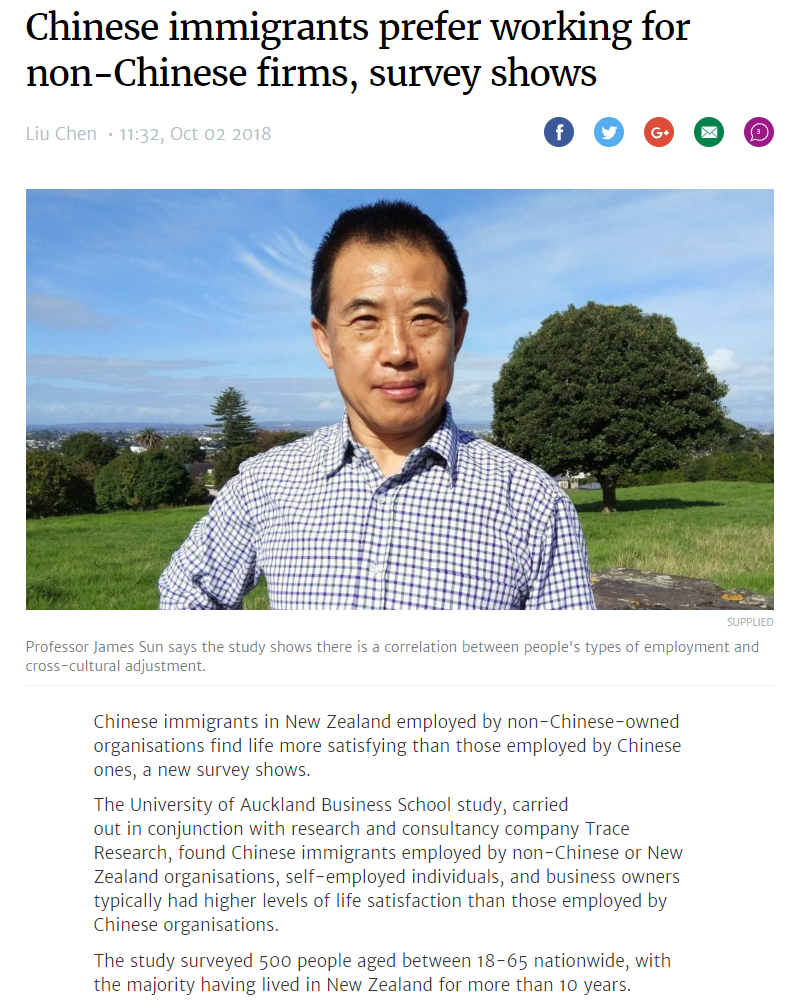 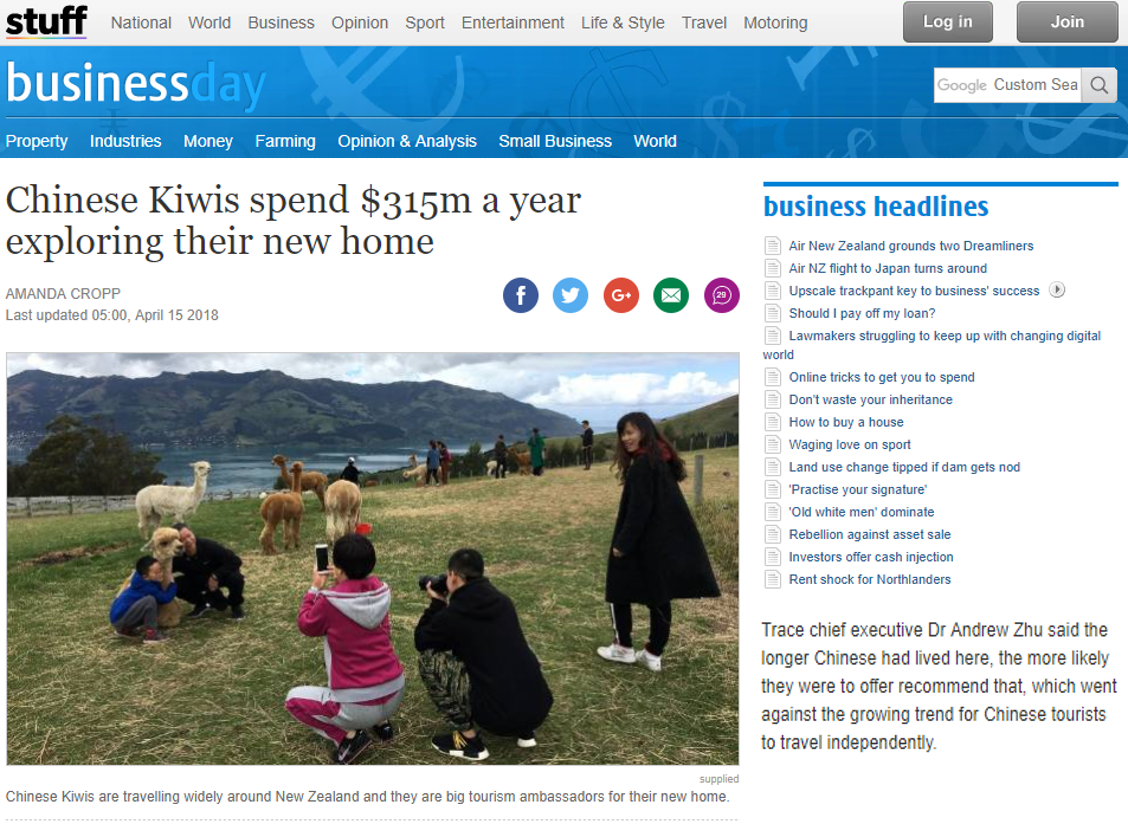 Chinese Kiwis are spending up large on exploring New Zealand, and they have a big influence on the travel plans of visiting friends and family.

Enjoying natural scenery, hot springs and spas, and hiking were their favourite activities.

And because they often did not have friends and family to stay with, the average holiday spend of Chinese Kiwis was about $1500 per person annually, triple that of other New Zealanders.

Bugger the pollsters? Not this time 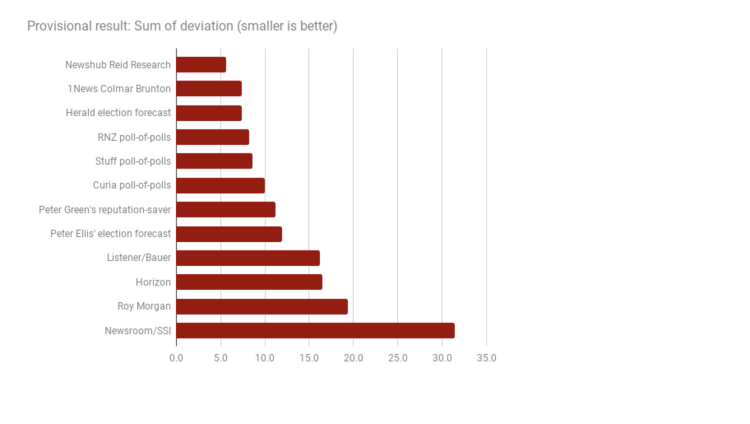 Bugger the pollsters? Not this time

Mark Jennings is co-editor of Newsroom. He writes about the media industry, business, and tertiary education.

Newshub’s political editor Paddy Gower has been quick to brag about the accuracy of his network’s political polling in the wake of the election result. The Newshub-Reid Research poll published two days out from the election got very close to the actual result.

It is likely to prove even more accurate if most commentators' predictions of a slight decrease for National and a slight increase for Labour and Greens prove correct when all the special votes are counted.

Gower’s delight over the result is partly revenge, because TV3 copped it after the 2014 election when it had one of the least accurate final polls.

The winner in 2014 was the rival 1 News Colmar Brunton poll. This time, Colmar was off the pace and in sporting terms “had a shocker” with its second-to-last poll before the election.

The Colmar poll had Labour on 43 percent and National on 41.

At the time, Labour leader Jacinda Ardern commented that she was “surprised”, a clear indication that it didn’t match the party’s internal polling.

“Looking back at it, I suspect the Colmar Brunton poll was an outlier, it is what happens when you are dealing with statistics – it is the random nature of sampling. It was bad luck for Colmar and 1 News that it happened so close to the election.”

However, the strong criticism international polling companies got after failing to pick up trends in the US and British elections is unlikely to be echoed here.

According to Robertson there is no “polling crisis” in New Zealand and “the established polls have done well, once again”

What does worry him is the decline in the number of polls.

“This is a big problem, there are now only two polls (Newshub and 1News) using bespoke methodology. Roy Morgan does one but they don’t follow the Research Association’s political polling code of practice.”

The two big newspaper groups, Fairfax and NZME did not run polls this election, instead doing forecasts based on the other polls.

“I think it is to do with cost and the Herald’s polling company Digi Poll closed down. Losing these polls is a problem - the forecasts and the polls of polls don’t have much data to inform their models and calculations.”

The way our pollsters gather their data is also changing.

This year Reid Research used an online panel to reach its quota of 18 to 35 year olds – 25 percent of the total sample. The remaining 75 percent were polled by the traditional method of calling landlines.

Dr Andrew Zhu who supervises the online sampling for Reid Research says the case for “online polling” is getting stronger.

“Twenty-five percent of people don’t even have a landline anymore and my research estimates that this will rise to 33 percent by the end of 2017. The reliability of the online panel we are using is getting better and better; therefore we have chosen to adopt online panels as a way to contact this hard-to-reach population.”

“Calling cell phones is not the answer so yes, I see a move to online as well as landlines and maybe even some door-to-door sampling.”

Both Robertson and Zhu feel criticism of the polls is largely unwarranted.

“I think unprofessional journalism is a bigger problem. Some media were reporting that National is making a comeback, whereas (apart from the one Colmar poll) National were remarkable steady in the polling. And it is often not made clear enough that the polls are taken at least a week earlier than when they are reported,” said Zhu.

Robertson’s view is that the polls provide a vital public service despite what some politicians think.

Former Prime Minister Jim Bolger once famously said “Bugger the pollsters” on the eve of the 1993 election and Winston Peters consistently rubbishes the established polls.

Robertson has some sympathy for Peters. “I think that 10 years ago he had a point, when the polls regularly underestimated NZ First support but voters have no other bellwether to measure politicians against – particularly when they say they are leading an electorate and it turns out they are not. There is no other way to get a view of what the public really think."

Should we trust the polls? Massey Univerity

Should we trust the polls?

The recent election upsets of Brexit and Trump have placed doubt over polling reliability. Whilst New Zealand has a good track record for accuracy, this campaign has seen huge discrepancies between polling results. The most striking was between the recent Colmar-Brunton poll which put Labour 4 per cent ahead of National whilst Reid-Research had National 10 per cent ahead.

To work out how the pollsters could produce such starkly different outcomes, we spoke to the polling companies about their methodologies and what factors would likely cause an election upset.

Is landline surveying to blame?

Reid Research managing director Ngaire Reid said that in the past the company has struggled to find a 25 – 30-year-old male from the West Coast. The hardest demographic to meet was under 35s.

Newshub now solely uses online polling to survey 18 – 24 year olds and most 25 – 35 year olds. It’s all a matter of speed and responding to consumer research which says landline use is in decline, according to Dr Andrew Zhu, whose company conducts the internet polling for Newshub.

Landline polling has become hard to achieve as a third of New Zealanders no longer have a home phone. Dr Zhu said that online surveying wouldn’t change the result “too much”, but he would still be paying close attention on the 23rd of September to see if it was accurate.

Could a high youth voter put the polls out?

A high voter turnout in New Zealand makes the chance of a shock result unlikely. Both the U.S and the U.K have voter turnouts in the low 60s, whilst NZ’s voter turnout remains strong at 76 per cent.

UMR mitigates for voter turnout by excluding voters who answer that they are uncertain whether they will vote, whilst Colmar-Brunton is confident that high voter turnout is enough to avoid this issue.

Oftentimes when two polls appear outside the margin of error it is a case of when the polls were conducted. The starkly different Green party projections in August were largely influenced by when Green’s co-leader Metiria Turei resigned.

The Colmar-Brunton poll was conducted after her resignation which placed them on 4.3 per cent. Reid-Research placed them on 8%, their polling taking place just a day shy of the leadership fiasco.

Is a polling embargo necessary in New Zealand?

Many countries overseas have introduced bans on publishing polls prior to the election. A 2012 study by the University of Hong Kong found that 38 out of 83 countries surveyed had a blackout period for publishing pre-election opinion polls.

There have been unsuccessful attempts in NZ to do the same. Winston Peters introduced a bill to ban polling 28 days from the election in 1999. He believed that voters were simply voting for the party they thought would win or whoever was performing best.

“It is vital for MMP, voters need to know if their party will meet the five per cent threshold,” he said.

Voters also make strategic decisions in their electorate if they think a party needs extra seats or if the seat is needed to form a coalition, as in the case of the Ohariu electorate.

“A polling embargo would be a restriction on free speech. Polls provide voters with information that can help them make a choice – for example whether or not a party is likely to cross the threshold to gain seats therefore indicating the risk of wasting their vote,” he said.

A polling embargo under MMP would also likely result in a rise of wasted votes. A 2015 Oxford study found the number of wasted votes increased in countries with highly fragmented party systems when pre-Election Day polls are restricted.

Poll: National will be back in Government if Chinese voters had their way 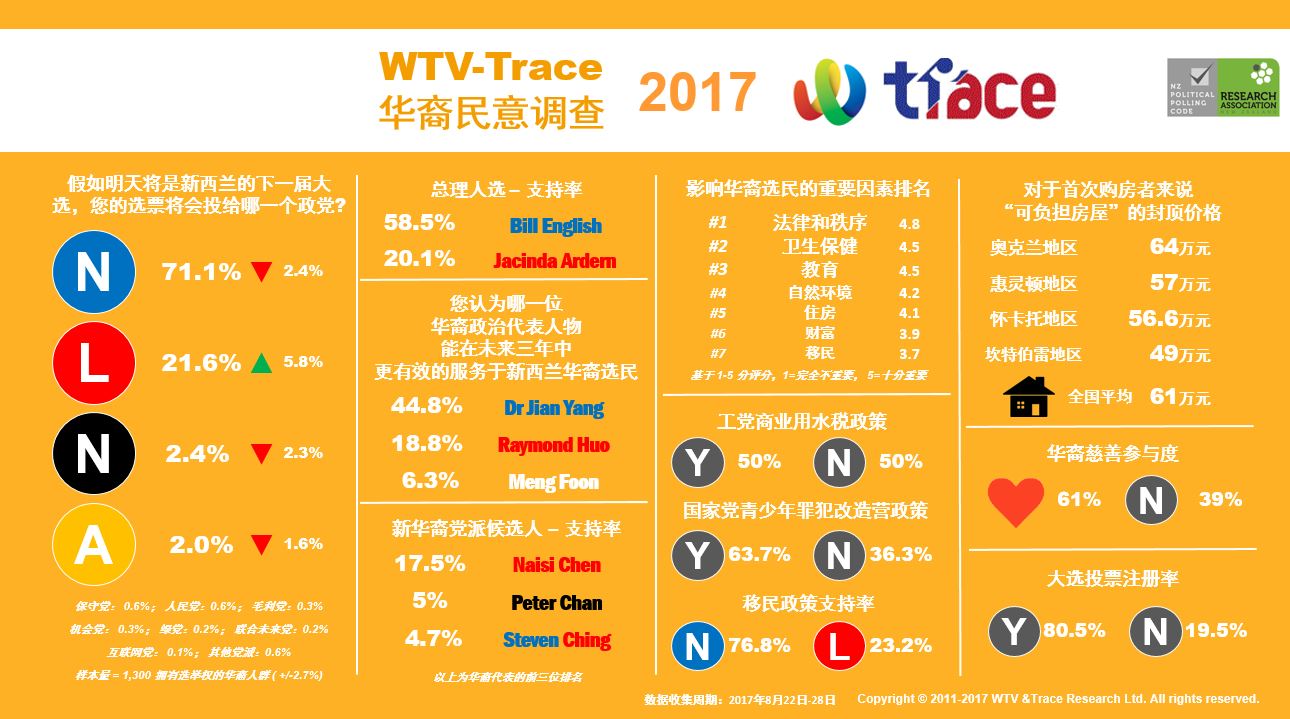 Poll: National will be back in Government if Chinese voters had their way

National would easily be able to govern alone without the need of any support parties if Chinese voters in New Zealand had their way, a new poll has found.

The WTV-Trace Research Chinese Poll found 71.1 per cent of ethnic Chinese will vote for National if the election was held tomorrow, a 2.4 percentage point drop from its previous poll.

This is at odds with some other mainstream polls which are putting Labour ahead of National. 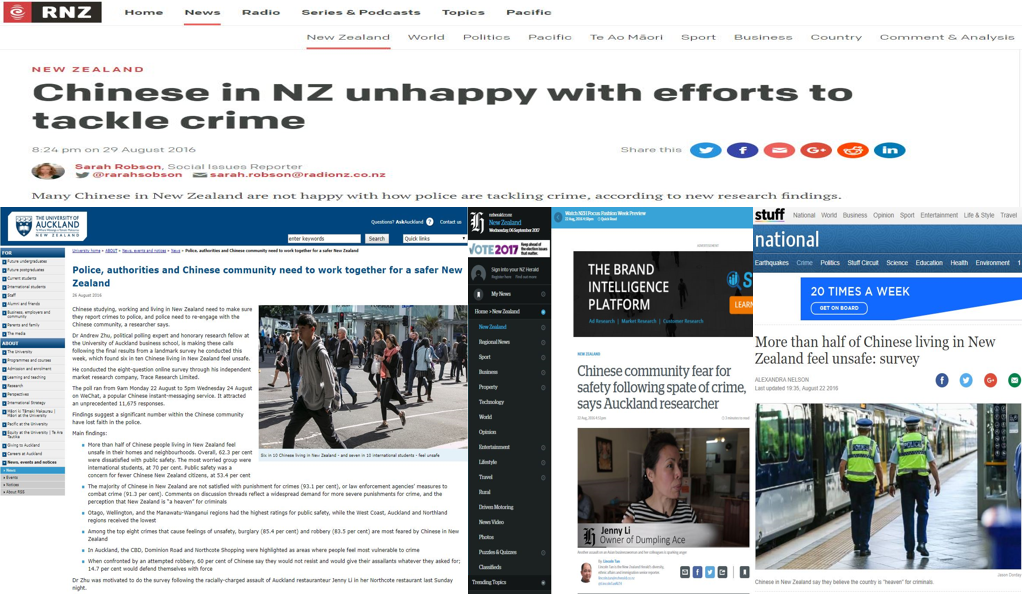 For the Chinese community: 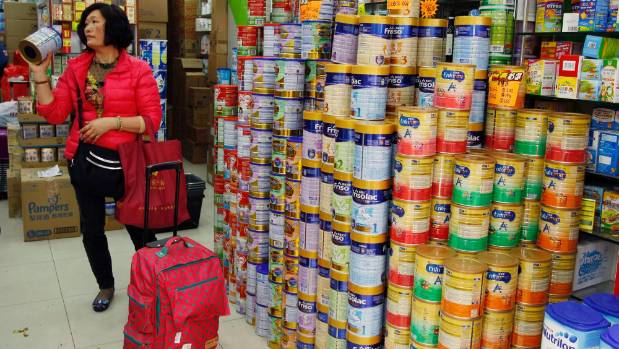